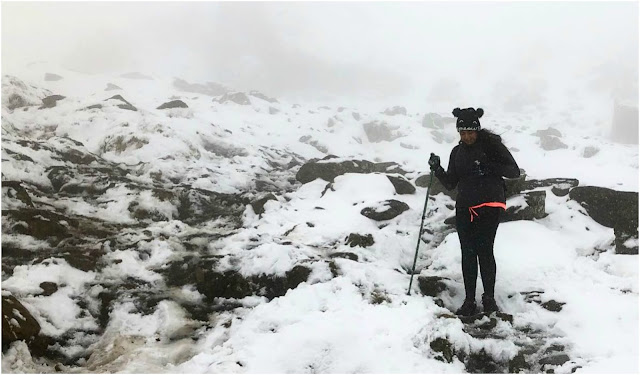 My hiking inexperience really showed when I decided to hike Mount Snowdon in Wales a week before I went and nonchalantly thought I could do it in my Nikes.

'No one does it in trainers, you're going to need new walking boots,' my brother advised me, the irritation in his voice leaving me heading to the nearest Columbia Sportswear store to find the cheapest pair I could. I found, what appeared to be a decent pair for £60, and at the time thought it was luck as it was only pair left in my size. I happily purchased, completely oblivious to the fact that my feet would swell while on the trail and I in fact, needed to size up.

Yet, while the hard interior and tight fit around my toes provided initial discomfort as I headed to Wales from London, the snowy 1,085 metre ascent up, coupled with the buzzing magnitude of what I was doing numbed any uneasiness I felt. Plus half way during the challenge, I appeared to forget about my own stupidity at almost not buying walking boots, when we all encountered a girl in plimsolls struggling to come back down. She became the gossip, laughing stock and shame of the hikers' community that day.

The morning of the hike, it rained. Heavy, pouring rain. The torrential kind that showed no mercy. I watched in silence as I chowed down a hearty homemade breakfast from amazing host Elaine at the Glyn Afon Guesthouse (highly recommended!!!). My little brother - who was the only person I knew who wouldn't reject me on this adventurous offer, and alas sat in front of me gorging on a hash brown - cracked a few jokes at our own, unfortunate expense.

The small worry I had of us two being completely alone on this mammoth peak was thwarted when we hopped on a bus jam packed with hikers - all of whom setting the atmosphere alight with nervous excitement. Heading deeper into Snowdonia National Park, we were presented with a flurry of heavy snow and hail, atop the rain - sending me, personally, into a confusion of exhilaration and fear. 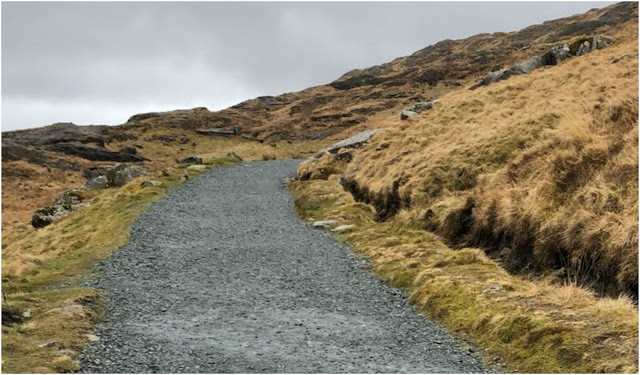 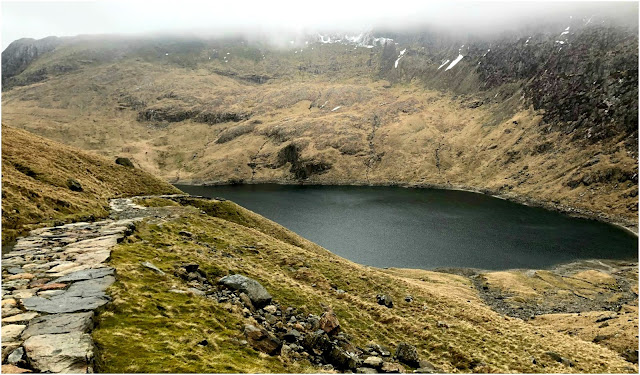 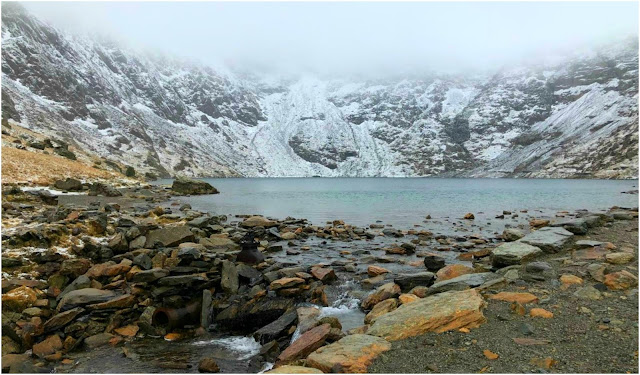 Arriving at Pen-y-pass for the Miners route (one of six, which promised jaw-dropping views) we were gifted with quite the easy, pebbly start adjacent to the scenic Llyn Glaslyn lake. Twenty minutes in, it started to get serious, beginning with a steep incline of haphazard, jagged rocks, closely followed by nearly vertical rock faces, requiring all fours to scramble up. Small patches of white quickly transformed into, what some would say, dangerously snowy terrain - coupled with extremely poor visibility.

Yes, it was a bad day to be climbing Snowdon - a peak regarded as easily accessible to those fit enough. With many already heading back down, me and my brother proved not ready to give up on the adventure. We continued higher and higher, stopping a few more times to get adjusted to the extreme blizzard. Soon we were being met with professional climbers with crampons and micro-spikes on their way back down. Some had made it, while others hadn't. Either way, most of them stopped to warn and advise on the extreme conditions ahead. 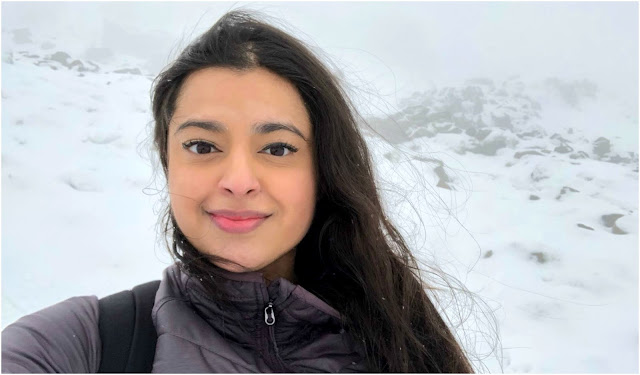 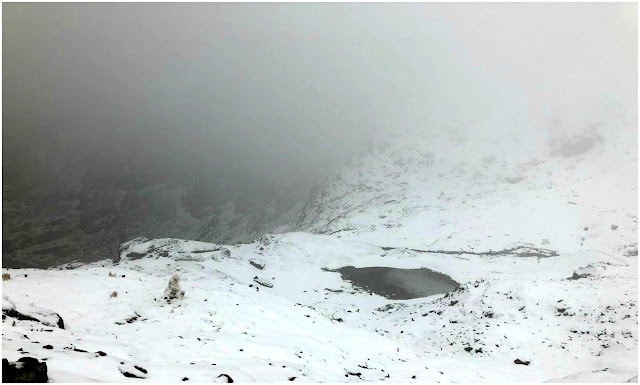 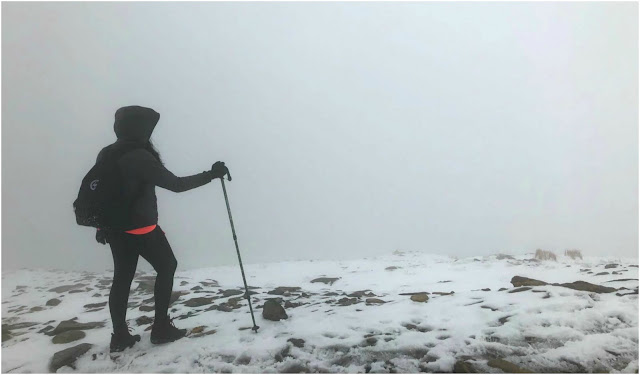 'The last twenty minutes, you'll get to some stairs, there will be a zig-zag, you'll go back on yourself and then there will be a 4ft wide ridge, which is extremely slippery. Nothing to grip on to. If you slip off that, that's it,' they warned. We ploughed on before reaching the dreaded steps - a mere 85 metres from the summit. So, so close. We gathered alongside a number of other hikers, contemplating what to do next. I witnessed defiant climbers attempting the stairs, disappearing into the clouds, before reappearing seconds later, sliding back down to reality.

And suddenly for the first time the whole hike, a sudden surge of intense and extremely anxious panic swept across me. In all my determined glory thus far, I crumbled and urged my brother to turn around with me. Yet, I could see it in his face, he really wanted to go up. I saw his little face sinking with disappointment. I couldn't bear it. I got up and started sliding myself forth, past my brother. 'What are you doing?' he asked in wide-eyed shock.  'Well, come on then!' I yelled back. Dazed, confused, yet thrilled, he followed.

My sudden braveness didn't quite cut it. The surface beneath me was quick to lose grip and I crashed down in the snow face first. I tried again and was quick to fall to my knees again, this time sliding a few metres down before a huge rock stopped me. Us siblings looked at each other and knew, realistically, it was time to go back down. We bid farewell and good luck to the others still questioning the severity of the last stretch and turned around. According to my brother, we spent close to an hour up there deciding what to do. Me, however, I'm pretty certain we were there for only ten minutes. One thing for sure, Mother Nature wasn't playing any games with us. It was a completely different, surreal, almost apocalyptic world up there. 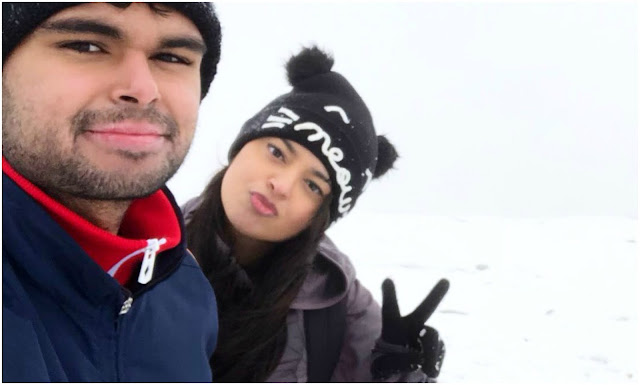 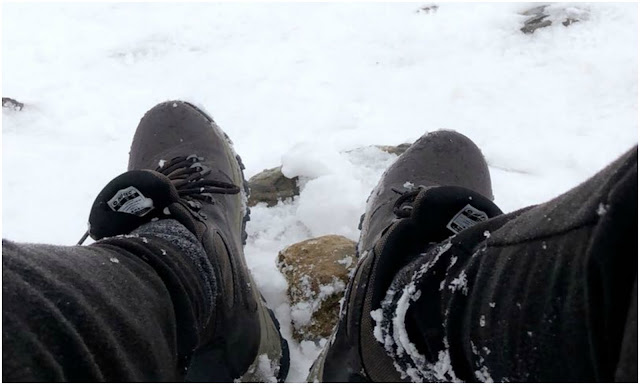 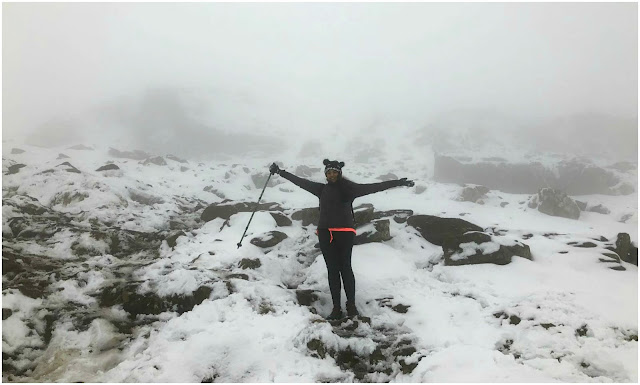 The ice made it impossible for us to walk down smoothly and we decided to slide down the first quarter. I could feel my bottom gliding over bumps and rocks, but the cold shocked my body numb -not letting the pain kick in until I arrived back at the guesthouse. (I still have garishly large blue and purple bruises, scrapes and wounds on my bottom) Thankfully, I was able to stand upright and enjoy the last few hours walking down. Stopping to take breaks, we saw others who we met near to the summit on their way back down. They all decided against it too, yet there was a proud unity and accomplishment in what we had spent the day doing.

While the hike in itself was something I cherished, the hikers' community is what added the icing on the cake for me. With a certain sense of late nineties nostalgia, gadgets, devices, phones were barely a sight. Vanity was also dismissed as everyone sat around in warm, durable, athletic clothing at the local pub and cafe the night before and the morning of. As difficult as conversation flows between strangers in London, the ease of striking up a chatter proved greatly authentic for even the most pessimistic of city-lifers, like myself.