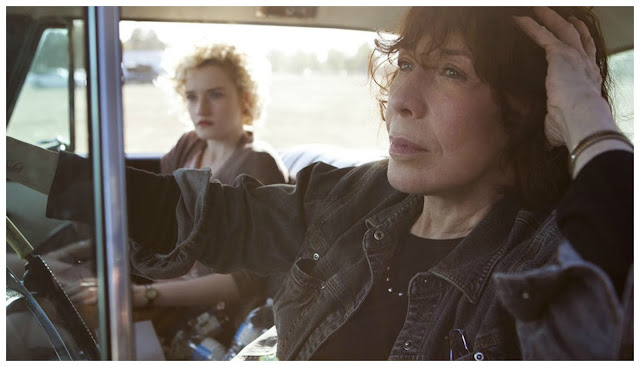 Set to release on December 11th in the UK, 'Grandma' is one of those films that takes you by surprise. I was invited along to a special screening at Sony Pictures Europe where all I knew about the film was that it featured a stellar female line-up. Essentially, the film is a simple one day tale of a fragile soft spoken teen Sage (Julia Garner) who turns up at her grandmothers house Elle Reid (Lily Tomlin) in search of $630 to abort an unwanted pregnancy. Elle by no means is the typical cookie baking, knitting grandmother. In fact she is a sarcastic, impulsive, once successful poet who's just broken up with her much younger girlfriend Olivia (Judy Greer). Weakened by her granddaughter's cries for financial help and not having the ability to donate herself, they set off on a journey to gather cash from old friends and former flames, causing turbulence and spilling secrets along the way.

The film in itself is a finely milled source of dramatic and comedic talents. Tomlin is gifted in her ability to generate laughs with her sarcastic delivery which couples well with the youthful enigmatic performance put forward by Garner- A rising star. In a movie, led so bashfully yet eloquently by women, there are a plethora of other women who stamped their mark as well such as Marcia Gay Harden, Laverne Cox and Judy Greer. For me, Grandma is one of those movies that has the unique and rare combination of not being overly exerting on a story-line and what it hopes to gain from the audience, yet holding their genuine admiration. 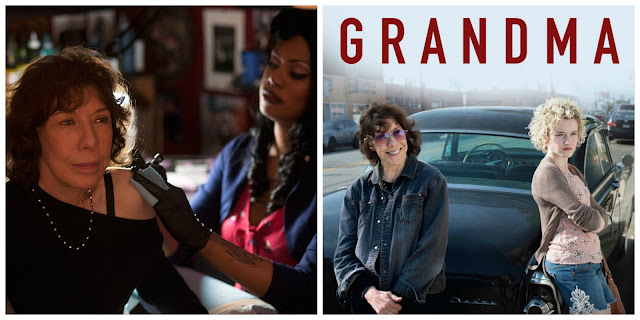 Written and directed by Paul Weitz, he answers a few questions on the film GRANDMA.

You have made big studio comedies and smaller character-driven films, what do you like best about each?
I think comedy is pretty depressing unless it's character driven. I'm drawn to making smaller films, and when my studio films have been successful, it's been because they felt smaller and more intimate. Happily there is no connection between how funny and emotional a film is and what its budget is.
Where did the idea for the film come from? Were any of the characters inspired by people in your life?
I had had the idea in different forms, but it only clicked when I worked with Lily on the film Admission. I didn't know her that well, but her intelligence rang like a clear bell. It made me think of a character and how much that character would have to offer a young woman under duress. I really don't know though where it all came from. But I returned to the same dingy cafe every day to write it in a small white notebook.

The film is very female-driven and centers around a young woman needing money for an abortion. What do you say to some criticism you might get for making a film that focuses on such a divided women’s issue?
The film is female driven. According to the Guttmacher Institute, as of 2008, 30% of women had had an abortion by the age of 45. So it's unlikely that most people don't at least know someone who has faced the question of whether or not to end an unintended pregnancy. The film doesn't make light of the issue. It puts it in the context of the characters, who all have their own perspectives towards the issue.
Are you trying to make a statement on your personal thoughts on the subject?
I am not trying to make a statement in the film. In my personal life I am a feminist, and I would have said that even before Emma Watson's lovely speech to the UN.

Can you tell us more about the casting process for the film and the characters? This part seems tailor-made for Lily Tomlin. Did you have her in mind when you wrote the script?
I wrote the script hearing Lily's voice. Then I asked her to lunch and told her I had written a script for her and told her the story and gave it to her. I'm sure that was a bit nerve-racking for her.

How long did it take you to write the script?
I thought about it in some form or other for a few years, and then wrote the first draft in about a month. Then I messed with it for a few more months.
Were there any issues that you had while filming that you didn't anticipate beforehand?
The thing that I didn't anticipate is that there would be so few issues. I was surprised that I had the time within those nineteen days of shooting to do as many takes as I wanted, and that's thanks to the actors and to Tobias Datum, the cinematographer, whose work I had liked in Smashed and Terry and other films. I had a great crew, all of whom were new to me.

Can you tell us about a scene that turned out better on-set than you imagined when writing the script?
A number of scenes turned out better than I imagined, because I was fortunate in casting. That's what I hope for, and it's probably why I write plays and movies as opposed to fiction.

What do you hope the audience will take away from GRANDMA?
The film is largely about moving on from loss through wit and empathy and the ability to say
"screw you." I just hope a splinter of it will lodge in their memory.

The UK release date of Grandma is December 11th. Let me know what you think of the movie!