"If women ran the world we wouldn't have wars, just intense negotiations every 28 days."
Robin Williams 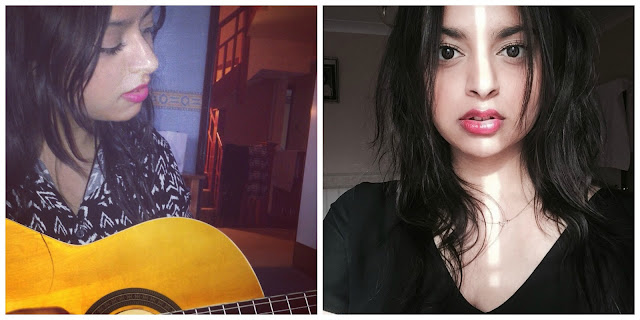 1. I'm 25 years old.
2. My favourite show is Criminal Minds.
3. Also a fan of Bates Motel, How to Get Away With Murder & OITNB.
4. I love wearing all black.
5. I love to write.
6. Growing up my nickname was Bean.
7. Hence when I first started my blog it was called 'Beans Blog'.
8. I am a first generation British Pakistani.
9. As well as English I also speak Urdu fluently.
10. But other than that I was terrible at languages at school. I had a go at French & German.

11. I feel like I could have pushed myself so much better at school.
12. I moved to Dubai at 12 and lived there for two years, where I attended a British school.
13. I was painfully shy growing up and socially awkward at all times.
14. I still have moments of social awkwardness.
15. For GCSE's I moved back to the UK last minute and the school I started at didn't offer Drama as an option. I felt it was the only thing that brought me out of my shell. Bummer.
16. In Dubai, adjudging to the heat was a huge issue. I blacked out and fainted on my first day. The ambulance was called. It was pretty dramatic.
17. I've been wearing glasses for 14 years. I needed them way before then, but my mum refused to believe there was anything wrong with my eyesight! My prescription is horrific and even the optician didn't know how I made it through life without them so far!
18. I've been wearing contact lenses for 13 years. My first pair were purple followed by grey. I now wear clear lenses.
19. At my heaviest I was 180 pounds (12 stone).
20. At 18 I went to a summer weight loss camp in up-state New York for a month.
21. I studied Sociology with Psychology at the University of Portsmouth.
22. If I could go back, I would probably have studied Journalism or Communications instead.
23. My parents had an arranged marriage.
24. My dream holiday is an all American road-trip.
25. I once worked as an admin assistant for a demolition company. Needless to say, I stuck out like a sore thumb.
26. I've also sold baby/family photo packages where I then took their pictures in the studio.
27. My first internship was at Asian Woman Magazine.
28. I worked at Shine Group in Primrose Hill during their last year before they merged with Endemol.
29. I'm a concealer hoarder.
30. I'm the middle child of two brothers.
31. I'm quite a negative person but in an internal state of mind. I don't mean that in an outwardly sense. I love complimenting and encouraging people.
32. I have a serious resting bitch face.
33. The goal is to be a celebrity reporter and/or writer.
34. I went through a massive gym phase for about 3 years and now I've just stopped.
35. I want to get into rock-climbing.
36. And hiking.
37. I prefer living in cooler regions than being somewhere super warm.
38. One of my best pinch me moments was swimming in the snow on Christmas Day last year at Iceland's Blue Lagoon with snow-capped mountains in the background.
39. An ink cartridge burst open on my face when I was little. I still have a teeny ink scar on my lip.
40. Another childhood story. I fell out of a car window as my dad drove really fast around a bend. I flew out really far away and landed in the middle of a cross section. Thankfully the other traffic lights were on red!
41. I am a severe 'wolf-biter'. In more scientific terms, I have the impulse control and obsessive compulsive disorder Dermatophagia.
42. I've been on crutches 3 times in my life.
43. I competed for Miss.Universe Great Britain in 2012.
44. I hate it when people call me 'Babe' or 'Hun'.
45. Reading is my form of escapism. I love crime novels, autobiographical accounts of successful women and low-key inspirational reads.
46. I have a vampire tooth.
47. I did gymnastics under the age of 10.
48. I kept a diary religiously when I was younger but my brother would always try to find it and read it!
49. I'm obsessed with Italian food.
50. My parents wanted me to be a doctor. They finally realised it wasn't for me when I passed out at the sight of blood.