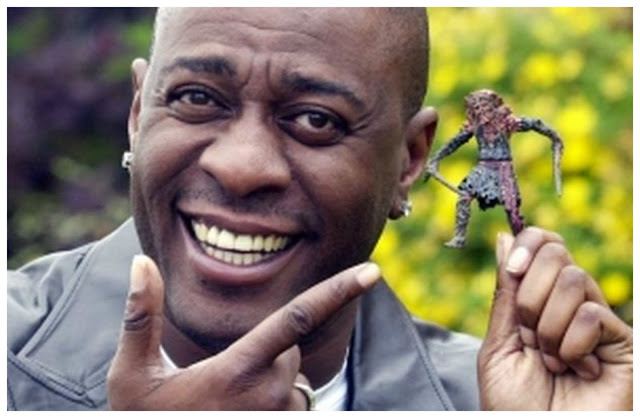 Everybody wants to be around Winston Ellis. He's warm, he's friendly and he's conversational. I found that out the hard way when I barely had the opportunity to speak to him at the N1 Angel clothing event the other week. However, catching up with him a couple days later made the wait worthwhile. He's an intriguing man with a story to tell. See for him, growing up in a tough neighbourhood he had a choice to make. It was either prison or martial arts. Thankfully he decided to pursue the latter, which gave him enough discipline and direction to become a three time Thai Boxing World Champion. That feat in itself was amazing. However it wasn't enough, for he was soon to discover his real calling which came as a matter of fact- being in the right place at the right time. It happened on a beach in Cyprus where he was relaxing and pondering over the next stage in his life, when he decided to engage in some martial arts moves. All of a sudden, a Chinese man came over to him and said his boss wanted to meet him. Turns out that man worked for Jackie Chan's company and they were location shooting in Cyprus. Immediately Winston was asked to fly out to Hong Kong to film his first movie and ended up staying there for 10 years. Winston speaks highly of his time in the far East-'I've been very lucky with my career being able to work in Hong Kong on a number of films. It allowed me to build a good foundation and understanding in the industry before returning to the UK.'

During his time there he worked with people such as Jean-Claude Van Damme and had the opportunity to act upon guidance by director Peter MacDonald (Rambo films) who encouraged him to take acting seriously in the UK. On arrival, Winston instantly found an agent and his career sky-rocketed with his highlights including the Pirates of the Caribbean movies and The Dark Knight. Speaking about the Pirates of the Caribbean job in particular, Winston recalls, 'I was filming a crunchy nut cornflakes ad in South Africa when my agent called and told me about the casting in the UK on my return. I went along with a really bad cold. I had to repeat one line and I think my rough voice got me the part'.

It's often these unpredictable circumstances in the acting industry that throws off many people trying to make it big. 'I had no idea what I was getting into becoming an actor as it's an industry of feast or famine', Winston states yet he understands the importance of making it out in Hollywood. 'There's a great deal more of film and television being produced in the States on a yearly basis than in the UK'. That is most definitely true. So what would be a dream role for someone who claims he's never taken an acting class in his life? 'I would like to take on a role that would really challenge me as an actor, something that I would have to dig deep to film'. That is easier said than does, yet Winston understands the right technique for this prospective acting role- 'I draw on life experiences before taking on any roles. I love taking on new characters and really challenging myself'.

As for someone who he would love to work with? Denzel Washington of course! As an actor, nabbing some advice from Denzel would be invaluable but Winston is in a comfy position to be dishing out advice to up and coming talent himself. 'To be an actor you have to be truly dedicated. It's very hard to stick with it when you go to hundreds of castings and you only get a small percentage of success'.

On the whole, keeping himself busy is a priority. 'I do a great deal of mentoring work in schools up and down the country and I'm involved with a number of charities. Project Postcode, Arthur Wharton Foundation, Sports Connections Foundation and Prostate Cancer UK as my dear friend Luther Blissett is one of their Ambassadors.' He's also set up Bredrin Films which provides youth training for new talent to shine and have the same opportunities that he did. In terms of acting, he is currently working on 'Penny Dreadful' alongside Josh Hartnett, Timothy Dalton and Eva Green. Impressive.