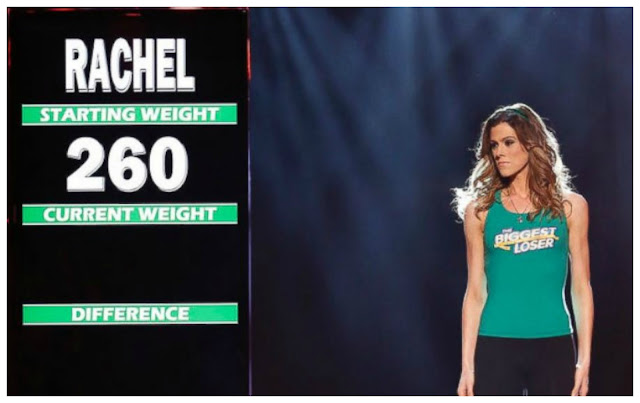 I first heard about Rachel Frederickson's controversial win on The Biggest Loser on numerous websites before actually watching the finale myself. There were bucket loads of complaints on social media sites that the winner Rachel had become too thin, that she was unhealthy, that she had taken it too far. I've been an avid supporter of the show and my heart melts at their transformations in the latter part of the series. Recently, I've been so busy that I fell behind with this season, but due to the recent controversy I had a rapid catch-up session to see what the fuss was about.


In a Western society obsessed with health and fitness and idealising media imagery, Rachel's 155 weight loss was immediately obvious. I have to admit that I too was a little shocked to see her walking out from behind the closed doors and standing beside the two other finalists, who looked like all other finalists from finales season past. Rachel in comparison looked tiny, losing 60% of her body weight and standing at 105 pounds, she surpassed many people's 'normal' weight loss expectations.

Personally I think her weight loss story is taken out of context and is by no means a realistic model for dropping weight. For months, she's been on a weight loss 'ranch' cut off from the outside world, solely focused on her health. Being a former competitive swimmer she had a natural athleticism about her, that centred her winning mentality even further. She was presented with a potential prize goal of a quarter of a million dollars if she won (which she did). These factors coupled together were stamped all over her appearance on her winning night- And I by no means mean that in a negative way. Disagree with me if you must, but I think she looks terrific.

No doubt, succumbing back to her regular life pressures, she'll inevitably put back on a small portion of her weight again as she will no longer be competing for an end goal. The pressure to be strict and on-point with her diet will fade. Her weight will balance out, but not to a point where she'll fall back into old habits again. This is a lifestyle change for her now. If anybody else watched this season, they would have seen her infectious endearing dedication to the cause. How possibly can she have gone too far, when she's strong enough to exercise competitively and sport the biggest smile on her face at the same time? I think for a lot of people, we wish we could have her determination and ability to succeed. And we do. We have to remember that a year ago Rachel was a couch potato, sitting on her sofa eating copious amount of food. If she can be healthy, so can we. I don't mean we should lose such a significant amount of weight- everybody's bodies tolerate weight loss factors differently, but we should have the tools and the ability to do it if we want to. Her trainer on the show Dolvett Quince also stated that Rachel's health was his number 1 priority and to please not look at one slice of her journey. So rather that picking on her, why not celebrate her success as an empowered woman who's rediscovered herself?


Do you think Rachel Frederickson took it too far?