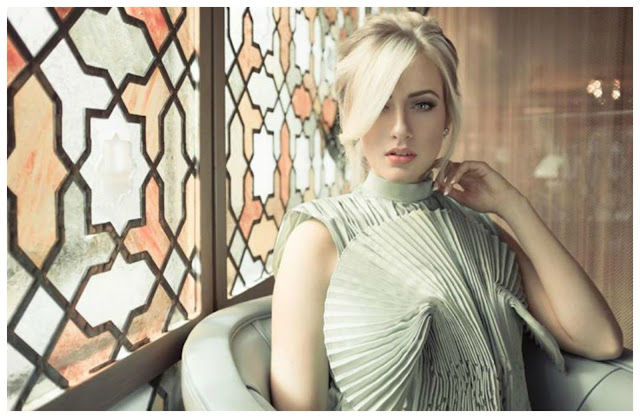 I first met the gorgeous supermodel Harriadnie Beau nearly two years ago. I was working as a senior dresser and an undercover blogger reporting on what really happened backstage at Pakistan Fashion Week, which was being held in Kensington, London. Either Harriadnie (who endearingly goes by her nickname Harri) knew what I was up to, or she was genuinely a pleasure to work with- Inevitably, the latter most certainly defines this fireball achiever. Whilst other models spent more time making diva demands and throwing tantrums than modelling, Harri was unpretentious, cool, collected, humble with a killer sense of humour- Qualities that are difficult to exude expressively working in such a cut-throat industry as fashion. There's undeniably a lot more to this blonde bombshell (who famously declined an offer to appear on The Only Way is Essex) than meets the eye and I was fortunate enough to catch up with her to see how she's cementing her supermodel status.

Immediately, I'm impressed at her list of career highlights. At 20 she has already taken to the runway in front of the Royals at the Berkeley dress show and has her own Wikipedia page! However, her most treasured moment came at the beginning of this year-'It has to be seeing my mums face when she saw me in the Tresor Paris advert alongside champion boxer Ben Jones at Westfields London, the commercial is shown on the big screens constantly and also the advert boards!' I can only imagine how that would feel!

So how did she go from being like one of us to having her face plastered across shopping centres? Well, her modelling path took off by chance. Even though she was on the books of Sylvia Young's Acting School until the age of 11, she was discovered in 2009 at the age of 16. 'I was discovered by chance in London by HMH Couture (designer to Cheryl Cole) and have been representing companies worldwide as their ambassador to date.' As someone who was new to the world of high profile couture modelling, she endearingly remembers being overwhelmed with how prestigious her first ever modelling job was.

No doubt, she looks fantastic on every shoot, on every runway and it's obvious she takes care of herself. As with the never-ending debate of 'size 0' in the modelling industry, Harri is adamant about not succumbing to the pressures of imagery. 'In the past I have been in contact with companies who have told me I would not be taken on as I am not a size 0. I am almost 6ft and a size 8 and I don't believe I would look healthy at a size 0. I don't really get pressured as I am very strong minded, I believe models should look healthy and comfortable in their bodies!' When it comes to tips and tricks to looking great, she lives by the mantra 'less is more', yet with fashion she believes 'you can ever be too over-dressed!' As well as HMH Couture, she lists Victoria Beckham, Gracious Alma and Hermes as her favourite fashion designers-'I have the most fabulous vintage Hermes gloves, I would sleep in them if I could!' Ahh wouldn't we all!

Currently, Harri is working on campaigns with Polished Teeth, Harley Street London and Gracious Alma. Whilst she has built a firm foundation in the modelling industry which doesn't seem to be dying down any time soon, she signifies a huge interest in presenting- 'I have already worked with Fashion One TV, Fashion TV, Dancing on Ice where I exclusively interviewed Kyran Bracken MBE and Chico. I have also presented my own radio show and presented at the BAFTA's! I get to show my personality a little more rather than just keeping a straight face on the runway hehe!' This resonates well with me as I get disappointed with the amount of models succumbing to the lack of charisma wrongly perceived as favourable in the modelling industry. Harri on the other hand feels the need to show her many strengths and as a strong independent women, why shouldn't she? Her work ethic is undeniable and despite her young age she lives by the motto- 'Youths a mask but it wont last, live it long and live it fast. You may never get another chance'. We should all take a leaf out of her book and grab every opportunity that comes our way because too right, we may never get another chance!