Carving a Pumpkin on Halloween 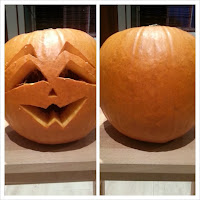 I carved a pumpkin the other day for the first time in my life. In my desperate attempt to do something authentic for Halloween, Barney was created. He ended up looking pretty smiley (I was going for the evil look, but hey you win some you lose some) I was however curious to know the real traditions of Halloween and how it came about. So gear yourself up for a little bit of Halloween history- 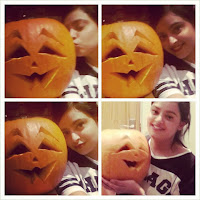 *Halloween was originally known as 'Samhain' at a Gaelic festival about 2000 years ago. They believed that the new harvest year began on November 1st. The Gaelic's also believed that the night before the boundary between the living and the dead became blurred. Alas, October 31st became the day when the dead walked the Earth!


*Mexicans also celebrate 'The Day of The Dead' on October 31st. It's a way to celebrate their family and friends who have passed away. This also follows on the Christian holiday of All Hallow's Eve.

*By the 1800's, playing pranks the night before 31st October became a huge tradition! The city of Detroit was hit the hardest with deadly arson attacks, most commonly known as Detroit's Devil Nights. The tradition has died down, but there is still fear every year that a new arson attack will strike. 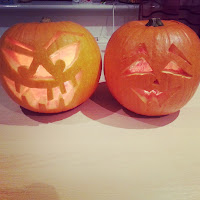 *The holiday slowly became more and more commercialised. People began dressing up in costumes from witches and ghosts to real figures in the public eye. Black cats were also introduced as a symbol of bad luck during Halloween. The carving out of pumpkins (Jack-o-lantern) is actually a British tradition- the flickering lights within is associated with haunted folklore.

*The tradition of trick-or-treating came from the myth that ghosts could disguise themselves in human form, knock on someones door and ask for food or money. If you made the mistake of turning them away empty-handed, you would be cursed.