The live audience auditions and boot-camp rounds of this years X Factor (UK) have come to an end- And I have to say that this year it was especially interesting watching the auditions take place, seeing as I was in the studio audience at one point! I decided to have a little scroll through Applause Store back in July to see if there were any tickets available to any shows I enjoyed viewing. X-Factor obviously stood out on the website and was inevitably calling my name. I applied for tickets and then the wait begun. One beautiful morning later that month, I awoke to an email saying that I had indeed bagged the audience tickets for X-Factor. YAY! I knew my little brother and one of my closest friends, Wisam were fans, so they decided to come along with me.

The day however, didn't really go according to plan. We headed to Wembley and it was probably one of the hottest days of the year (they even referenced the summer heat during an episode) and on top of that, all three of us were fasting due to Ramadan. We didn't expect the lack of food and drink to be an issue as we thought we would be in he middle of jaw-dropping talent to take our minds off hunger. However, the afternoon show which we were attending was postponed. By 4 hours. The morning session had over-run. By 4 hours??! Other afternooners who received the news found it the perfect opportunity to relax and have a bite to eat. I mean food=relaxation right? We just couldn't do that. We decided to take shelter from the heat in a nearby building and engage in conversation and people watching. 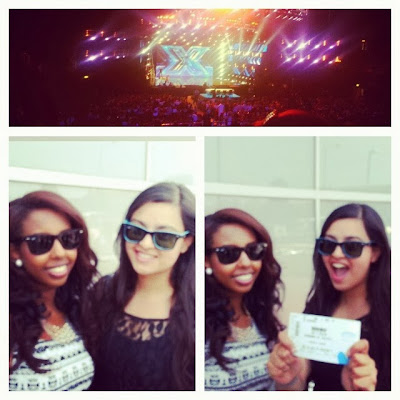 Finally time came and we were ushered in, immediately inundated with apologies for the lateness. We settled into our seats and soon after watched Dermot O'Leary do about 10 takes introducing the live auditions of the show. There I was thinking Dermot was perfect and nailed it on the first try every single time. Nah but I still love him. The judges then walked out and due to our far away seats, they looked like miniature creatures. Have to admit, I was pretty jealous of the people sitting at the front. We were explained that the contestants had already auditioned in a room before, which was pretty surprising- I was kind of hoping to see the bad ones! Nevertheless, a flurry of contestants came on stage and I soon forgot about the long wait and began to enjoy myself. The most notable contestant from that day had to be Alejandro Fernandez-Holt, even though he just got eliminated. Yes, I was there for THAT Spanish rendition of 'Hero'. The other contestants were great too, with a few who got the boot with good reason.

Soon, we were able to eat and we rushed out and grabbed American style chips and burgers. Fantastic. We stayed for a few more auditions and then headed back before it got too late. Great experience! I know a lot of people go to these auditions to see the judges and the funny auditions- I wanted to as well. But I also wanted to see how everything worked behind the scenes, the production, the screw, the set-up etc etc. Glad I went :)
Share:
at October 02, 2013
Labels: auditions, Caroline Flack, celebrity, Dermot O'Leary, Gary Barlow, James Arthur, Louis Walsh, music, Nicole Scherzinger, Personal, reality television, Sharon Osbourne, simon cowell, singing, Wembley Arena, x-factor