"What about the stuff that gets up around the sides of condoms?"- Hannah Horvath

'Ew I watched one episode and I was like wtf is this? I like watching shows with pretty people thanks' said a friend of mine, disgust etched across her face when I asked if she had watched the new show 'Girls'. I looked at her bewildered. I mean sure I love watching shows with the rich and the beautiful who have dramatic story lines surpassing their tender years and romantic love stories that put Romeo and Juliet to shame- But I have to say that I for one have given into the craze that is 'Girls'. I hate giving into crazes, mainly because the crazes over the years have involved vampires, werewolves and wizards. I don't know about you but I am not a vampire, or a werewolf and I am certainly not a wizard.

I am however a personality clone of 'Hannah Horvath', who is played by the immensely talented Lena Dunham. Not only does she star in this relatable series for women in their twenties, but she created it and wrote the script for it. The incredible writing made me gag for the another episode online, when I finished the one I was watching. The series is currently airing on Sky Atlantic here in the UK. For those people who aren't watching in on Monday nights whilst hoping their parents don't walk in, or who haven't happily succumbed to loner-ville like I did online, here is the synopsis of the show-

Dunham plays Hannah, a hopeful writer who two years out of university is still interning. Similarities are smacked in my face right there and then. Asking for a paid position gets her sacked, and she does her best to make ends meet in the jungle that is New York with her close circle of friends as they navigate their way through their twenties 'one mistake at a time'. Her friends include stunning but serious and responsible Marnie, innocent virgin Shoshanna and cool and fiesty Brit- Jessa. 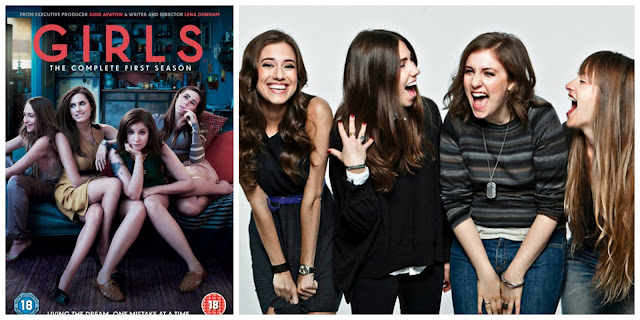 The most incredible thing about this show is that it airs our dirty laundry in a way that no other show has done. Like mentioned previously, whether you have interned for what seems like an eternity, googled your symptoms and convinced yourself you're dying, encountered lesbian romps, had countless awkward sex experiences in hopes that one day you'll feel like a badass pornstar, had a loving relationship but felt like he started turning into a creepy uncle, had someone read you innermost cringiest thoughts in your diary, got jealous of that annoyingly clever girl from years ago who's on the verge of super-stardom, been in love with a guy who dissapears for months on ends, found our your ex-boyfriend is gay, dabbled in sexting which went wrong and engaged in angry arguments with a close friend that comes after months of bitter buildup- then you will be able to relate to this gem of a show. The following are a few quotes from the show that parallels our lives-

*I'm so happy to see you I could murder you- Remember those times when you stand there awkwardly talking to whoever is wasting your time, whether it was that sleazy guy who drooled at the mouth or that annoying girl who rubbed her perfect life in your face, telepathically pleading with your friend to come and save you? And then finally she appears out of thin air? You have never been so happy as you are at that point in your life. That is when this particular quote comes into play.

*No one could ever hate me as much as I hate myself, okay? So any mean thing that someone's gonna think of to say about me, I've already said it to me, about me, probably in the last half hour- Let's face it, we're our own worst critic. Anything mean anyone else says without thinking is something we've already validated to ourselves on a daily basis. It's an innate natural thing that we can't help.

*I've been dating someone who treats my heart like it's monkey meat- We've all been there. We all feel weird in ways we cannot even imagine when we're in love. Monkey meat is a good comparison- why didn't I think of that before?

*Sometimes being stuck in my own head is so exhausting it makes me want to cry- This is particularly true, late at night when you feel as if you're the only one in the world who's awake and your brain won't shut up. All of a sudden you have the ability to think about anything and anyone at a million miles per an hour. It's not fun especially when you have an early wake up call.

*Do you know that part on your resume where they ask if you have any special skills? Well, it's the thing where they ask you to list like, 'yoga, Spanish, water skiing, Photoshop.' I feel like I don’t I have any special skills- For real......what does one write? I like 'socialising, travelling and blogging'.... I feel like a muppet writing these generic answers, but I doubt ' I can make duck noises with my hands' will get me the job.

*I didn't lose my job, I gave it away- How do you explain the reason you lost your job in a less embarrassing way? You politely stepped down to give someone else a chance and to pursue other options for yourself of course !

*I'm like the least virginy virgin ever- Once in their 20's virgins will tell themselves anything to make them sound appealing in that crucial first sexual encounter of theirs. I cannot even proceed to tell you the giggles I have got from these types of conversations.

*You know what the weirdest part about having a job is? You have to be there every day, even on the days you don't feel like it- I have had many interesting jobs in the past, which I don't think I can ever consider as a full time job. Swinging on my chair to make myself dizzy, blowing up balloons e-x-t-r-e-m-e-l-y slowly to kill time, risking my internet rights at work whilst stalking that girl on Facebook who's just moved to Los Angeles, gone out to hand out vouchers but ended up in a corner with a giant nutella pretzel...yes I have done it all.

*I am 13 pounds overweight and it has been horrible for me my whole life- Don't talk to a girl about her weight. We will eat you up alive. Even though many of us realistically aren't that obese....we still think we are. So just go along with it and help us to lose weight. Don't sit there with a kebab in front of us. Even though I hate kebabs I will still eat it. Magnetic forces are at an all time high between women and food- well between me and food anyways.

*I just want someone that wants to hang out all the time, and thinks I’m the best person in the world and wants to have sex with only me. And it makes me feel very stupid to tell you this because it makes me sound like a girl who, like, wants to go to brunch, and I don’t want to go to brunch, I don’t want you to like sit on the couch while I shop, or like even meet my friends. I don’t even want that- And honestly, sometimes that is really ALL we want. Is it too much to ask for ?