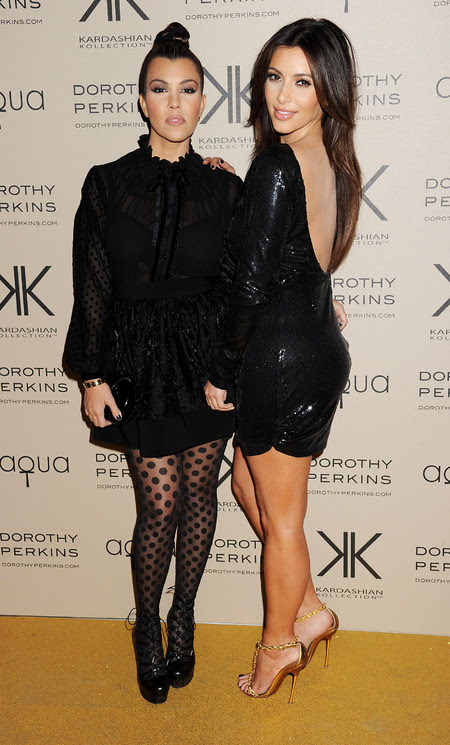 I never thought I was one of those hysterical 'fan' types who would camp out the night before just to see my favourite celebrities at signings/appearances- And thankgod I can hold my head up high and say that I resisted the charms of the Kardashian sisters, who have been in London the last couple of days promoting their Kardashian Kollection clothing line in partnership with Dorothy Perkins.

I admire the sisters for their work ethic which may cause some to snigger at the thought of the sisters actually 'having a legitimate career'. Kim's sex tape has been at the forefront of her fame over the years. However, there have been many celebrities who have had sex tapes, nude picture scandals and reality shows that do not come even close to the alarming heightened success that these trio and their extended family have managed to reach. The Kardashians took an opportunity and ran with it.

It makes sense that they would proceed to launch their clothing line here in the UK because as much as we deny it- Britain follows on the coattails of the USA. Everything that happens there is imported to the UK with sheer speed- and that includes the 'Kardashian Kollection'.

The collection focuses on demure pieces made up largely of dresses and tops that may be more suited for an older female audience. From their whole collection there are probably a few pieces I actually like. I think the strengths in their collection lies in the bags. I will definitely be investing in one of their large black tote bags soon!

However, I don't think the sisters need to worry about not having designing skills of the Alexander McQueen kind or about sales not doing well- they are at such a pinnacle of celebrity culture that people will actively buy their products. I don't blame these people.
Share:
at November 11, 2012
Labels: alexander mcqueen, celebrity, Dorothy Perkins, Fashion and Beauty, Kardashian Kollection, Khloe Kardashian, Kim Kardashian, Kourtney Kardashian, leopard, london, sex tape, tote bag, UK