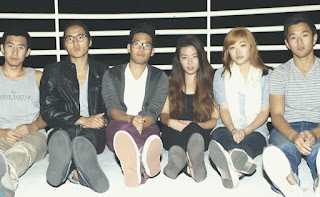 Not too long ago I received an email from LA. Something about monsters, Honda's and folk music. Looking into it closer, I realised it was an opportunity to write up a story for my Young Hollywood column, about an incredible band whose story quite frankly endeared me.

Trying to make it in Hollywood is such a struggle for many talented bands who vie vigorously for the attention of music labels, who in return selectively sign bands they think will appeal to the mass market. One unique band- 'Monsters Calling Home' got the cutting edge when they nabbed some influential attention. Squeezed into their Honda with their music equipment they decided to film their first music video. It wasn't until they placed the video on YouTube, that their perfect car-honed acoustics was noticed by the bigwigs at car-giant Honda.

Honda has really immersed themselves in social media and have gone on to develop the 'Honda Loves You Back' programme to interact with the public. Upon viewing Monsters Calling Home's music video, Honda really wanted to give back to the band and gave them a chance to perform on ABC's Jimmy Kimmel . They finally unleashed their incredible story telling music through their whimsical and folk style. They're a guaranteed future success!