I'm very proud to be British, and my brand is British- Victoria Beckham

I hope everyone had a great Christmas ! It doesn't quite stop there yet though- Boxing day sales start today ! Hello on-line shopping ! I wouldn't even risk it going out, as the onset of claustrophobia will probably destroy me :/ Other than that New Years is coming up as well ! 2012 is upon us, and if we go by popular media, it'll be our last year to live. So time to tick off those things from your bucket-lists.

As I said in my last post, the new issue of Asian Woman Magazine is now out and you can see the cover below. Make sure you pick yourself up a copy if you haven't done so yet. The cover featuring the 'The Only Way is Essex' girls caused a lot of controversy, which I wasn't expecting. I was actually quite pleased that they were on the cover as I personally felt they were representing multicultural diversity. However, there was a varied response from the media- from both Asians and non- Asians. There was an outcry from Asian girls who felt they weren't being represented, whereas the 'TOWIE' girls were questioned for their reasoning behind fronting a national 'Asian' publication.

I have to say that I am a bit shocked, with Emma West rallying her controversial opinions in the notorious 'My Tram Experience' YouTube video- and now the supposed 'racism' row over the 'AW' cover. Really? Do we still feel THAT unrepresented by our upbringing, that we need to vocalise them in such a manner and not give into the idea of living in unity? I feel as if the cover of 'Asian Woman' represents me down to a T. I am not merely a Pakistani girl furious at the lack of Asian role models in an Asian publication- And i'm not merely a British girl confused as to why people would feel the need to dip their toes in to other cultures. I am a British Asian 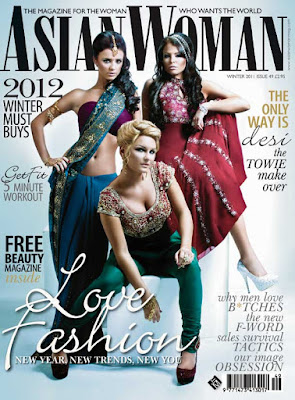 Editor of ' Asian Woman', Jay Wimal summed up the press coverage on twitter by stating 'On the one hand a lot of people are appreciating our mission to bring the beauty and appeal of Asian fashion and culture to wider audience. On the other hand it's also unveiling a mass of ignorant opinions that are at best irrelevant, at worst horrifically prejudiced'