Lots of people want to ride with you in a limo, but what you want is someone who will take the bus with you when the limo breaks down- Oprah Winfrey

Its Christmas time again and that means a lot of fattening food and a lot of time spent with the nearest and dearest. Unfortunately for me, there was a certain type of guilt that lingered with me for a while. See the thing was for the past two months i hadn't been talking to one of my best friends. Early October seemed a momentous time for trivial things to be blown out of proportion and for hot tempered words to be thrown around with fiery ease. However, this Tuesday afternoon over a cup of skinny vanilla latte and a deadly hangover, those troubles got resolved. Ive been on one heck of an emotional roller coaster and I'm pretty sure Katherine has too. The following is the 5 most important things Ive learnt from being in a fight:

1) Meeting as fresh faced freshers, we hit it off instantly. A 7pm trip to the local chippie turned into an all night rave and a bed time of 6am. You'd think after two years of having crazy nights like that we'd have the guts to say what was on our mind to each others faces. That's the thing- I've learnt i don't have the guts to be upfront. The most horrific display of text messaging was sent back and forth. Complete disaster.

2) Ive also learnt that embarrassing moments with someone you used to be so close with are inevitable to avoid. Katherine coming out of the shower with me suddenly bursting around the corner resulting in her screaming, happened on a couple of occasions. It then resulted in the one second self debate as to whether i should laugh at the situation or not. That came across as a half lopsided smile on my face. I looked incredibly silly.

3)No matter how many fantastic people I've met since not speaking to Katherine ( and i have met some AMAZING people)it was never and never would have been the same. For two years Katherine and i had been frolicking in the world of our own private jokes and signature nights out. The depths of my life story lie with her- my secrets, my troubles, my highs and my lows. She knows me better than anyone else. So not being able to talk to a person who knew me that well, even though she lived in the room next door, still felt incredibly weird. Like one of those annoying jigsaw puzzles, that always had a piece missing. Frustrating.

4) Two months is a long time. Yeah it really is, yet it went too quick in our ignorance of each other. Being a stubborn brat for two months, is golden time lost. There were times in the whole situation when i was angry, hurt, felt like a villain, annoyed and just simply wanting my old life back. I have my own life back now :)

5) The final thing I've learnt, is that having a one hour conversation with Katherine in a dim little corner of Starbucks made me so incredibly happy. I don't think I've ever been happier getting things of my chest. Ive never been happier making up with someone. I have been happy with the new friends I've made, but nothing compared to the original golden oldie. 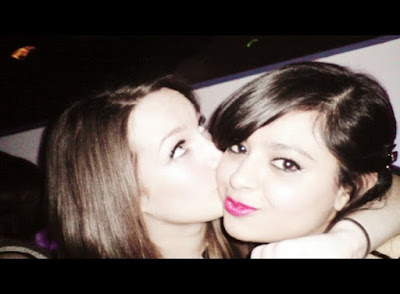