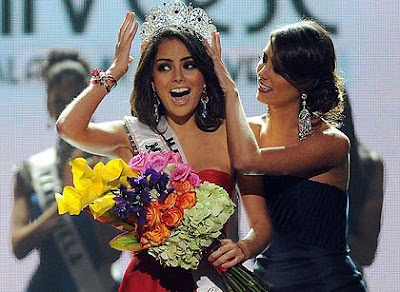 Some woman are physically repulsed at the idea of parading around in a bikini and dropping in jewels during the evening gown competition- But i want to take this chance to congratulate the newly crowned Miss.Universe- Jimena Navarette of Mexico. She was one of my sentimental favourites from the beginning along with Miss.USA ( bringing in some Asian flair. I also thought Great Britain had a gorgeous entry- Tara Hoyos-Martinez, but the competition was so stiff, many beauties got left out in the dust.

Many people believe that pageants are going against everything feminists have fought for. I disagree. First of all woman get to 'choose' if they want to participate in a pageant- and especially in these national pageants, courageous young woman are representing their countries in a poised and elegant manner. A lot of responsibility if you ask me. Once you win, it isn't all plain sailing in glamorous photo shoots and media calls, but sincere and crucial charity work.

The beautiful Jimena of Mexico now has a full time job and I'm sure will do her best in handling the year with grace. Its not the easiest thing with a recent example being Oxana of Russia who was crowned Miss.Universe in 2001. However she was unable to handle the busy schedule and therefore was replaced by her first runner up, Justine of Panama.
Nobody seems to say anything about the world of 'Page 3' and 'Glamour' models, yet one easily criticizes a 'pageant', even though these organisations bring in positive changes and are enriched with divine history.